Researchers in both the School of Engineering and the School of Natural & Computing Sciences at the University of Aberdeen have been working with CI Microbalances for around 20 years.

Prof James Anderson, head of the Surface Chemistry & Catalysis Group, supervises students from both this group and the Materials & Chemical Engineering Research Group.

In the past we have studied a wide range of catalytic reactions, typically looking at acid sites on the surfaces of oxides, but currently we have three major projects that use the microbalance
rigs.

In the first project we look at the reaction between calcium oxide and carbon dioxide under different thermodynamic conditions to understand losses in capacity during calcium looping cycles and through complimentary spectroscopy, the reactions occurring purely on the surface, or in the bulk of the materials. We are interested in looking at the effect of water on these carbon capture processes also.

In the second project we have directly interfaced a microbalance with a reaction cell placed in the beam path of an FTIR spectrometer to allow us to produce absorption coefficients for adsorbed molecules – simply put we can relate what we “see” in the spectra with a mass change recorded by the microbalance, allowing us to produce a coefficient that we can then use to quantify products formed in catalytic reactions.

In the third project we measure the water adsorption capacity of MOFs under different humidities as part of our investigations on the stability of MOFs. We correlate spectroscopic and diffraction studies that identify adsorption mechanisms and structural stability with the amount of adsorbed
water.

We have recently published a review article on quantitative spectroscopy:

We are in the process of publishing multiple articles in the newest areas outlined above.

We use a wide variety of gases – CO for probe molecule studies of transition metal catalysts, basic probe molecules such as ammonia and pyridine to look at acid sites on solid oxides, CO2for carbonation of carbon capture sorbents, H2O vapour to look at water adsorption in MOFs and a variety of hydrocarbon vapours to determine absorption coefficients for organic molecules. Weuse Lab Weigh Software to monitor in real-time but often use specialist software for interpretation and presentation purposes.

On being asked why the University of Aberdeen chooses to work with CI’s microbalances rather than others on the market, Greg Mutch responded:

“The ease of integration with other equipment is a real advantage for us as we often look to study materials under harsh conditions, at high temperature, under vacuum and in the confines of FTIR spectrometers.”

Regarding technical support from CI Precision, he says,

“On the odd occasion we have had to call for support the staff have been very friendly – particularly a certain Martyn Wright!”

Asked whether he would recommend CI Microbalances to others, he replied,

“Yes, we find them useful, reliable and of wide potential application. Quantification of FTIR spectroscopy is at the forefront of the application of the technique, without microbalances we would not be able to perform these measurements.”

For more information about CI Microbalances, thermo-gravimetric kits and accessories from CI Precision, or to discuss your specific application, please telephone +44 (0) 1722 424100, or
e-mail sales@ciprecision.com 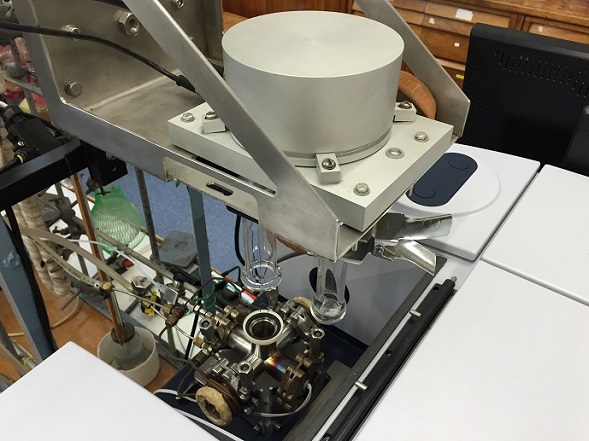